x
I published an author one time. I will never publish him again.

He is a fraud.

Now, I have been associated with Savas Beatie, published widely under Savas Publishing, and have assisted many other agents, publishers, etc. so I am not sharing which outlet this man/woman wrote for, or the genre. I will refer to this author as a "he" for convenience sake. It may be a woman. But the gender is irrelevant. It is WHAT do you as an author that matters.

His work is barely mediocre but tends to sell. His writing is pretty awful, and needs to be rewritten from soup to nuts, and cut by about 40% to remove the repetitious filler and chaff to find the wheat. Sort of like taking a shovel to a pile of manure to find the pony hidden in there somewhere.

One publisher who had also released one of his books called him a "one-man editorial wrecking crew." I can vouch for that. One of my hired editors made it through three chapters before throwing up her hands to scream "no mas."

At that point I hired another, told him to completely rewrite and cut whatever, and he did. And the author never said a word. I don't even know that he read the galley proof. He really didn't give a damn as long as he had yet another book out with his name on it.

So you are are thinking, "What does the fraud part come into this?" right?

Another publisher who had suffered through one of his poorly written repetitive manuscripts to produce a book, demonstrated the perfidy to me some time ago. "This guy posts fake reviews on Amazon, either directly or through accounts of others. And I think he also hires fake reviewers, which is not hard to do. He has done it for several books."

Then my publishing acquaintance pointed out about half a dozen of these "reviews". We read them together on-line. They all had something in common, and you can find these commonalities here:

The kicker for me was when I later discovered one "reviewer" who reviewed two of this author's books on the same day, writing almost entirely the same thing.

After I poured a gin and tonic and burned through a good cigar to relax, I called this author on it and told him that, as his publisher his fraud taints MY company. MY name is on the spine, copyright page, title page, etc. I made it clear he had 24 hours to remove the bullshit review on the book I had published, or I would report him publicly.

Of course he vigorously denied it. I told him the clock was running. The review remained. I published a comment to the review under my own name, called him out publicly, and apologized to anyone who had bought the book.

The review came down within hours.

The same author offered me other manuscripts to publish. Breathtaking, I know. I told him what I thought of that idea. He went elsewhere to peddle his junk.

Your behavior as an author reflects upon your publisher.

As a man and a publisher who values his reputation (and the reputation of my partners--i.e, our authors), if you ever pull that stunt with me and I find out, I will name you to the world and tar and feather your behind to Kingdom Come. And trust me, Ted's will WILL be done.

Your work will stand or fall on its own merits. When you put yourself out there, you will get some bad reviews. It is the nature of the beast.

How I Came to Discover Douglas Southall Freeman.... 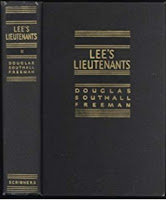 X
This appeared as a newspaper editorial some fourteen years ago. I thought readers of this blog might enjoy it.

I don’t think there is a better way to spend an hour on a Saturday morning than with your children perusing old books at one of the sales at Oak Ridge High School.

My ardor for books is boundless. When I was a kid my friends carried around sports cards; I was a card-carrying member of the HBC (History Book Club). They went fishing; I went to the library. They hung around school lockers and talked; I ducked into empty classrooms to finish  reading (or writing) a short story. If there was a book sale within 50 miles, I was there. Naturally, one of my adult obsessions has been whether my kids would be as smitten with dusty old books as is their papa.

Whole trees fall to the ax to satisfy my 11-year old daughter Alex's unquenchable thirst for ink-based adventure. And my polar opposite 7-year old son Demetrious? He loves it when I read to him—but picking up a book on his own and losing himself in another world seemed a lost cause.

For two years I have taken him to every Oak Ridge book sale. Recently he spotted a sign announcing another and demanded we attend. “I’ll pay for my own books,” he informed me. Like a warrior on a mission he zeroed in on the children's table. After amassing a sufficient stack of titles, he presented them for check out. I stood well behind him.

A kind lady with a warm smile tallied up the damage. She held up one book suitable for a teenager and commented to my son, “This is for older kids. Can you read it?” Something gently tugged at the back of my mind. Demetri offered a shrug in response. She continued sorting until she came to a not-so-gently read Amelia Bedelia book.

“How about a dime for this one?” she asked.

A flood of memories washed over me. Demetri began fishing in his pocket for money as my mind wandered some three decades into the past . . .

One summer day my grandfather brought me a pummeled rummage sale copy of the first volume of Lee’s Lieutenants: A Study in Command, by Douglas Southall Freeman. My grandpa charged me a dime and a kiss on his shiny bald head.

It was my first Civil War book. I was eleven or twelve. Who knew.

I read it aloud walking along the lilac-studded northern boundary of our Iowa property line. After a steady barrage of questions, my mother tired of the game and dropped a dictionary on a basswood stump. I got the message. Do your own research....

I spent the next week living with a cadre of men I would never meet, challenging myself as I flipped through Webster’s all while imagining another time and place. To this day I still smell pungently sweet lilac whenever someone mentions the Battle of Malvern Hill.

I remember how excited I was when I discovered there were three volumes in the series, and how the librarian with a freshly‑sharpened yellow pencil stuck deep into her beehive hairdo tried to discourage me from checking them out because I was “far too young to read and understand Freeman.”

I opened a book and read aloud. That convinced her.

With the second volume under my arm, I peddled my green Stingray bike (with the long cool banana seat) across town to the Union soldier’s memorial obelisk in Central Park, where I leaned against the sun‑warmed polished granite and devoured the stirring Introduction and first chapter.

I finished the book in the back of a Dodge station wagon on the way to New York City with the family, and the third installment on the stoop of an apartment complex in Brooklyn ten days later.

The colossal scope and breadth of books in general, and the Civil War in particular, finally began to dawn on me. My grandfather’s dime stirred a lifetime of passion. . . .

I stopped my son as he pulled a few coins from his pocket to pay for his books. “I’ve got it,” I told him with a smile he returned in kind. Before we arrived home, he had the torn paperback out of the sack and was reading for all he was worth.

“Wanna play some catch?” I asked, hoping I knew the answer.

“No, I want to read,” he replied without looking up.

Without another word, Demetri walked upstairs and flopped down on his bed. I walked into my library, pulled out that battered first volume of Lee's Lieutenants, trotted up the steps, and asked him to scoot over.

He smiled and wiggled closer to the wall. I dropped down next to him. And we read together. And then we fell asleep together . . . reading.

A dime well spent can still buy you everything that really matters.