Slash at the Warfield: The Best Live Rock Guitarist Ever? 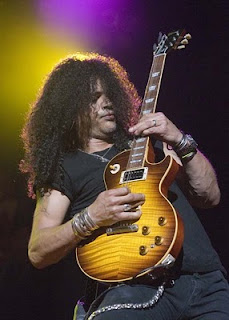 I was never a huge Guns N Roses fan, as I wrote last May in the posting "My New Favorite Slew of Songs." Sure, I liked a few of their tunes, but I never bothered to see them live. And frankly, Saul Hudson (aka Slash) never impressed me as a guitar virtuoso. Good? Sure. Unbelievably good? Nah.
I could not have been more wrong. 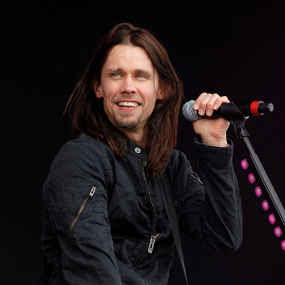 Last January my brother turned me on to Slash's "Snakepit," a group from some years back Slash formed after GNR broke up. The songs were so-so, but a couple really stuck with me, as did his melodic guitar riffs. Just two months ago Slash put out a new album featuring different lead singers on nearly every song. And he wrote every song. The wide variety of music, from jazz to blues, from ballad to hard rock, is impressive. Sunday night my brother, his son Nikkos (my Godson/nephew), and a friend of ours caught Slash at the Warfield theater in San Francisco. His lead singer for the tour is Myles Kennedy (a talent I had never heard of until this new Slash album). Man can this guy sing! I had no idea what I was in for. 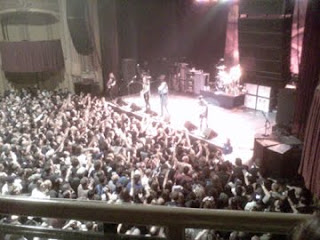 We were in the balcony (see the shot to the right from my Blackberry), the venue is small (some 2,000 people), and the view was magnificent. The band played for 2.25 hours. Here is the set list. You can click and see clips next to the songs. (Note the sound is not nearly the same, nor the effect. Hit his Godfather theme and watch and listen carefully especially after 1:30 into it. This is an old version--it is different today.)
My jaw still hurts because my mouth was open in abject shock most of the show. I have seen scores of concerts, from Gordon Lightfoot and Fogelberg to Rush, Kiss, Pink Floyd, Deep Purple, Iron Maiden--you name it. I have never seen a guitarist perform so well, for so long, with so many styles (blues, classical, hard rock, jazz, et al.) and flavors as Slash did Sunday evening. I am STILL blown away.
His solo theme from the Godfather was a masterpiece. He transitioned into it, and soloed for ten minutes and it was so lovely, so magnificent I could not take my eyes off him. Every time I thought it would end he transitioned into something else that dropped my jaw open. And when he finished, he transitioned into "Sweet Child O' Mine."

If you get a chance to go see Slash on this tour--do so. You will not be disappointed. 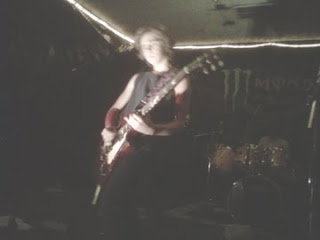 PS: This is a photo of my 16-year old nephew Nikkos (from a phone, while he is jumping around, sorry!) playing GNR's "Civil War" the night before the Slash concert at the battle of the bands up here in Northern California. His band JAXX won against bands whose members are in their 20s. Ready for this? The JAXX members are ages 13 (drummer) to 16 (Nikkos and Alan, guitarists). The bassist is just 15. And they write almost all their own music. Go get 'em, Nikkos!
(OK, back to Failure in the Saddle, the forthcoming Confederate cavalry study on Chickamauga!)

Slash is THE man. I remember seeing him in a few LA area bars in the early 1980s and was blown away then. Now that he is clean of heroin he is so much better. He has turned his life around and is a real musician in the true sense of the word.

Thanks for posting this and good luck to your nephew! Make sure he gets a college degree first. He will still have his entire life to pursue music as hard as he likes. It is nearly impossible to go back, so do it in order: college (play while you attend) and then career--music or whatever he chooses. You still have to feed yourself. Take it from someone who knows firsthand. Sleeping on a floor with five other guys when you are 24 is not a productive way to spend your life.

I'm more of a Buckethead guy myself...but now if Slash were to come out on stage wearing a KFC bucket...

thx for the review, Slash is playing better than ever from what i've seen around, he's also making cd's of some fo the shows he's playing, surprised you didn't get the one at warfield, it seemed as a great night and from the videos on you tube he seemed to have a "spot on" night...

by far my favourite guitarrist, his melodies are far from regular whilst keeping the same style he's been using for years... that's a true guitar player, he knows what he's doing when he grabs one