XXXX
This Goes in the "Oh S**t" Category 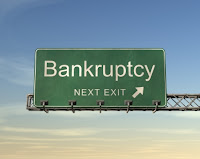 Borders officially announced Sunday night that it will not be sending vendors payments due at the end of January either. And they indicate that publishers are not the only ones being stiffed, saying they are also "delaying additional payments to landlords and other parties." Not paying rent is more drastic than holding off vendors, and indicates the company's liquidity crisis continues to worsen.
They say the non-payment (which they call a "delay" in the press release, but that's what you call it when you intend to pay someone in full a little while later, which is not what is proposed) "is intended to help the company maintain liquidity while it seeks to complete a refinancing or restructuring of its existing credit facilities and other obligations." The statement also adds, "Borders emphasized that it understands the impact of its decision on the affected parties, but that the company is committed to working with its vendors and other business partners to achieve an outcome that is in the best interest of Borders and these parties for the long-term."
From a practical perspective, anyone who was continuing to ship goods to Borders has likely learned their lesson, and it increases the likelihood of a bankruptcy filing--whether forced or voluntary--if the bookseller does not meet the many conditions of its new financing arrangement shortly.
The impact of not paying rent in particular may impose a timetable on how much longer Borders has to plead for concessions before seeking court protection. While we have no direct knowledge of their lease conditions and potential grace periods for payment of rent, and laws do vary from state to state, commercial landlords are generally able to petition for eviction within about two weeks after provided for non-payment deadlines.

According to a memo on an employee web site, Borders workers were told by management to expect inquiries from unpaid landlords and vendors as well as media and customers and asked to "politely but firmly state that all questions are being handled by the corporate office and refuse to offer any other comments." They were instructed to keep the media from photographing or interviewing within company stores, but the company also noted: "Do not suggest this, but it is acceptable for media to photograph/film the exterior of the store if they do so on public property, such as your parking lot."

Day traders are finally getting the message, too. This morning's share price plunge has taken the stock below 75 cents a share, its lowest point since early 2009.
Posted by TPS at 10:08 AM