John Luzader served as the staff historian at Saratoga National Historic Park in the 1960s. During his tenure there he scoured through archives on both sides of Atlantic. Armed with reams of original source material, he walked every yard of that expansive battlefield (and its related satellite engagements at Fort Ticonderoga, Fort Stanwix, Oriskany, Bennington, and others). As a result, he came to understand the American Revolution's decisive campaign in a way no other historian ever has. And all of his peers acknowledge exactly that.

And then John began writing about it in his unique "old school" style that drips with charm, verve, authority, and insight. And he kept writing, year after year. And then he tinkered--year after year. As bestselling author and former chief historian for the NPS Robert Utley told me, "John just could not let go."

John is now in is mid-80s and lives in a retirement center in West Virginia. With some prodding from friends and fellow historians (including Jerry Greene, our author of The Guns of Independence: The Siege of Yorktown, 1781, and Indian War Veterans) John let go of his manuscript, which we picked up two years ago. Other than a few odds and ends, it is now finished and ready for the proofreader. I remembered it as being good; I had forgotten just how good.

John's deep insight into the campaign and its personalities opens windows into the American Revolution in general, and Saratoga in particular, that no other historians have yet explored. The book is a treat to read, from the opening chapter exploring the halls of British power and the roots of the 1777 invasion to the final chapter explaining the ramifications of the campaign.

The end result is a 504-page magnum opus with a dozen original maps, modern battlefield photos, a helpful dramatis personae, nine appendices, orders of battle, end notes, bibliography, index, and a Foreword by Eric Schnitzer, the park's current ranger/historian. All of us here at Savas Beatie are honored to be the company that finally makes John Luzader's lifetime of work available to the general reading public. 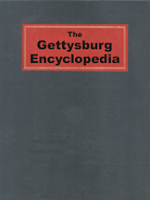 Nearly three years ago we revealed that author Brad Gottfried (Maps of Gettysburg and a host of other Gettysburg-related titles) and I had begun work on a large single-volume Gettysburg encyclopedia. We receive a steady stream of emails and calls asking about the status of this project. Here is a brief update . . .

We are both happy to announce that content-wise, the volume is about 85% complete.

Scores of contributors from all walks of life (from licensed Gettysburg battlefield guides to college professors, from freelance writers to amateur historians who have amassed immense knowledge on particular slices of the Gettysburg story) are being edited now, or are ready to go. I believe Brad is still seeking contributors for a few remaining entries. We would like to complete this aspect of pre-production by January 1, 2009. (That might be a bit optimistic.)

We anticipate this single volume will run about 800 pages (including lots of original maps) in a 7 x 10 hardcover double-column format. We have not yet determined a retail price. The date of publication has not been set, but we are hoping for June 2010.

In the near future we will republish the Gettysburg Encyclopedia web page, and include a list of the individual entries, a brief bio of each contributor, excerpts, and much more. If there is something in particular you would like to see on this web page, please send us an email and let us know.

One of the issues we will be dealing with is whether to sell this title into the main book trade (chains, Amazon, etc.) or make it available only through Savas Beatie. Your thoughts on this are also welcome.

As always, we look forward to any suggestions you have that might make this project a better book. It is a true (and expensive) labor of love, and we want it to stand the test of time and functionality.
Posted by TPS at 5:08 AM 2 comments:

I ran a poll recently asking this question: "Primarily, I buy Civil War books with a focus on . . ." The three possible answers were: Confederate, Union, or both about equally. Although only 15 people responded, it was about evenly divided (4, 5, and 6, respectively).

The poll did not reflect what sales figures have long told us: Southern/Confederate titles sell substantially better than similar Northern/Union titles--and by a factor of at least 2 to 1.

Let's assume a pair of manuscripts are submitted to us for publication, one on General Smith (CSA), and the other on General Jones (USA). Let's also assume we can only fit one into our program. All things being equal (general's status, writing and research quality, author compatibility with Savas Beatie, etc.), I would select the Confederate-related manuscript. If sales were the sole reason driving my decision, sales history tells me it is the right decision.

We received a lengthy H-Net review today on our recent Shiloh battle study. This caught our eye:

"Not alone among publishers that present conventional military research as a
cornerstone of their catalogs, Savas Beatie has in its five-year existence established a notable reputation for producing exceptionally worthy volumes. This trend continues with O. Edward Cunningham's path-breaking Shiloh and the Western Campaign of 1862, a work originally penned over forty years ago. With its printing, only now will it receive the recognition it assuredly deserves."

The trick is dusting off the chaff in search of the wheat. It is not easy, but we work hard, and will work even harder, to bring you "exceptionally worthy volumes."

Thank you to everyone for your continued support of our titles. Without you doing your thing there, we could not do what we love to do here.

One of the hallmarks of maintaining a competitive edge in any business is the difficulty of entering into that business. Once you are there, great. But is the barrier of entry for others high or low? How easy is it for others to slide into your livelihood? For book publishing, that answer is careening in one direction like a wild car chase in a James Bond movie.

Software, the Internet, and print-on-demand technology has pummeled the barrier and opened the floodgates to independent publishers and authors who choose to self-publish. As the managing director of a thriving independent publishing house, I understand this. I also welcome it. But there is a learning curve, as one author recently discovered.

I received a call last week from "John," whose manuscript I had turned down last year. His research was very strong, his writing less so, but his work merited publication because of its unique topic. But it was not something Savas Beatie was seeking to publish. "John" decided to publish his book on his own. (I advised him not to.) He called to tell me the book was in the mail. (I thanked him.) He was sending me a copy as a way of saying thanks for some of the guidance I provided him.

The book arrived. It looked as I thought it might: self-published. The paperback boasts a mediocre cover design even though it was "professionally" done. The type size inside the book is 1-2 points larger than it should be, and the font is not one I would have selected. The headers are cringe-worthy, as are the margins and choice of paper. The text reads well because he hired a capable editor (at my suggestion).

I called John this morning to thank him for the signed book. He acted embarrassed, and told me as much, because the book did not turn out as nicely as he had hoped. One early review crucified his effort. I immediately decided to put him at ease. Our conversation went something like this:

Look, I wince on occasion when I pick up and flip through some of our inaugural titles from the early 1990s. Book publishing is not an exact science, and there is a steep learning curve for anyone who wants to get involved and do it right.

Those who have never ventured into this morass we call publishing have little idea what it entails. All the pieces have be in place--from designers and editors, to printers, suppliers, distributors and, of course, buyers. The other day I picked up one of our recent titles, and the first thing I spotted when I opened it was a small mistake in the text! Authors, editors, designers, indexers, and proofreaders scrubbed it, and yet a mistake slipped through. Alas, it is the nature of the beast.

It is easy to lampoon a book for this or that fault or mistake--especially when you don't have to produce one yourself. It's the cousin of blasting another's labor in a public review, without ever having written one yourself to fully grasp the difficulty involved. I offered Tim Smith's bestselling Champion Hill as an example. Lauded by nearly everyone, a lone reviewer trashed it. We later found out he was deeply involved in researching the battle and our book preempted his efforts.

John hung up relieved (I think). And I'm relieved, too. As soon as our conversation ended, I reached over and opened our latest book and spent twenty minutes scanning for something amiss. I closed it with a smile.