I Will Not Publish Gettysburg Books. (Yeah, Right.) 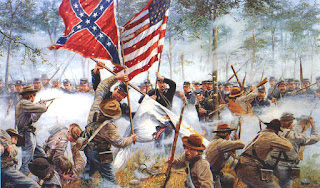 “I have to tell you,” texted a customer through Facebook yesterday. “You are officially my  publisher of record.”

That was a humbling statement. I thanked him for his support and the kind words, of course. But that statement triggered a little flash of a decade-old memory and a deep chuckle.

In 2003, Russel H. “Cap” Beatie, the author of the multi-volume The Army of the  study (cut tragically short by the silencing of his exceptional pen), reached across a continent to lasso me back into the world of independent publishing.

We had never personally met. With Savas Publishing I had accepted his first two volumes, but I didn't publish them because the company was sold in 2001. We remained in touch with his weekly call to me to discuss everything from publishing to Popes and politics, to medicine, the Medici's, and medieval warfare. In that regard we were certainly kindred spirits. We were also both attorneys, though I was (hopefully) on the path to redemption, while he was tramping along the other one.

I resisted getting back into publishing as an owner because I loved what I was doing—ghost-writing books for agents, authors, and other publishers, working on my own research, and coaching little league. Life was good and calm.

He finally flew out for two days of face-to-face discussion. When we were about ten seconds away from a handshake across the table, I made this naïve stipulation: “I will not be doing Gettysburg books. I want to make that clear,” I insisted. “It has been done to death. There are a lot of other topics in that war that need to be explored.”

Cap was fine with that since he pictured Savas Beatie as a general military history publisher. He knew I wanted to produce Civil War books and that my following was in that genre, but he wanted to do more ancient material, Napoleonic, Indian Wars, and so forth.  was irrelevant to him.

As it turned out, it wasn’t irrelevant to readers, researchers, writers, or the bottom line. Manuscripts and queries from exceptional authors began pouring across the digital transom. My first inclination was to get out a Bic lighter and ignite the stack, puff a cigar, and enjoy the glow.

Thankfully, good sense and a little patient reading convinced me otherwise. And boy was I wrong. The original material was staggering, the insights and research fresh and invigorating. Rather than “stop the madness,” I was more inclined than ever to ramp up the  insanity. And so it has come to pass.

Below, in very rough order of appearance, is our Gettysburg-related list of books that have either appeared in print or are in the final stages of development. (I have the nagging feeling that I have missed one or two, and if so I apologize in advance and please leave a comment and let me know.) Off the top of my head, we have another six or so under contract as I write.

I welcome your thoughts on this list. Favorites? Any you are looking forward to reading? Any here you had never heard of?

As always, thanks for your support.

Silent Sentinels: A Reference Guide to the Artillery at , by George Newton

The Maps of Gettysburg: An Atlas of the Gettysburg Campaign, June 3 - July 13, 1863, by Bradley Gottfried

The Rashness of That Hour: Politics, Gettysburg, and the Downfall of Confederate Brigadier General Alfred Iverson, by Robert Wynstra

The Gettysburg Campaign in Numbers and Losses: Synopses, Orders of Battle, Strengths, Casualties, and Maps, June-July 1863, by J. David Petruzzi and Steven Stanley

The Complete Gettysburg Guide: Walking and Driving Tours of the Battlefield, Town, Cemeteries, Field Hospital Sites, and other Topics of Historical Interest, by J. David Petruzzi and Steven Stanley

Sickles at : The Controversial Civil War General Who Committed Murder, Abandoned Little Round Top, and Declared Himself the Hero of , by James Hessler

Plenty of Blame to Go Around: Jeb Stuart's Controversial Ride to , by Eric J. Wittenberg and J. David Petruzzi

One Continuous Fight: The Retreat from Gettysburg and the Pursuit of Lee's Army of Northern Virginia, July 4 -15, 1863, by Eric Wittenberg, J. David Petruzzi and Mike Nugent

Protecting the Flank at Gettysburg: The Battles for Brinkerhoff's Ridge and East Cavalry Field, July 2 -3, 1863, by Eric J. Wittenberg


Those Damned Black Hats! The Iron Brigade in the Gettysburg Campaign, by Lance J. Herdegen

“The Devil’s to Pay”: John Buford at Gettysburg. A History and Walking Tour, by Eric J. Wittenberg

"Stand to It and Give Them Hell": Gettysburg as theSoldiers Experienced it from Cemetery Ridge to Little Round, July 2, 1863, by John Michael Priest

Fight Like the Devil: The First Day at Gettysburg,July 1, 1863 (Emerging Civil War), by Chris Mackowski and Daniel Davis

Pickett's Charge at Gettysburg: A Guide to the MostFamous Attack in American History, by James Hessler, Wayne Motts, andcartography by Steve Stanley

The Gettysburg Cyclorama: The Turning Point of the Civil War on Canvas, by Chris Brenneman, Sue Boardman, and Bill Dowling 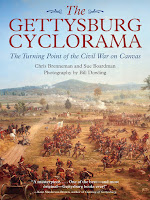 In the Bloody Railroad Cut at Gettysburg: The 6th Wisconsin of the Iron Brigade and its Famous Charge, by Lance Herdegen and William Beaudot

Spies, Scouts, and Secrets in the Gettysburg Campaign: How the Critical Role of Intelligence Impacted the Outcome of Lee’s Invasion of the North, June –July, 1863, by Tom Ryan


Out Flew the Sabers: The Battle of Brandy Station,June 9, 1863--the Opening Engagement of the Gettysburg Campaign, by Eric J. Wittenberg and Daniel Davis

The Second of : The Confederate Victory that Opened the Door to , by Eric J. Wittenberg and Scott L Mingus, Sr.

Double Canister at Ten Yards: The Federal Artillery and the Repulse of Pickett's Charge, July 3, 1863, by David Shultz

The  Encyclopedia, by Bradley Gottfried and Theodore P. Savas. (Yes, this is not a rumor and is very close to being finished.)

And there you have it.