An Author and his Book. A Primer. 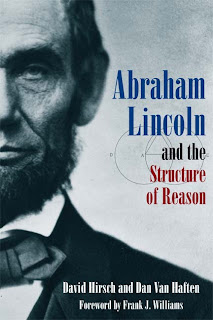 Or, in this case, "Authors and Their Book."
David Hirsch (attorney) and Dan Van Haften (retired electrical engineer) are the authors of the just-released Abraham Lincoln and the Structure of Reason.
Yes, I thought the same thing. Keep reading.
This is not "another" Lincoln book. I turned it down twice thinking that it was just that. I was so very wrong. So often we hear (and use) the word "groundbreaking" to describe a new title. It is overused. But it is also applicable to this book. I will post more on this title later, but for now, understand two things.
1) The authors discovered Lincoln's mastery of Euclidean Geometry, and discovered howt he used its precision and simple brilliance to write his best-known speeches--and then they prove it. Truly it is a jaw-dropping discovery. The authors are not household names in the Lincoln field, so traditional Lincoln scholars are scratching their heads in amazement.
2) The authors understand the elevator pitch and that carrying their book around and talking to people is important. David (the attorney) was in Boston at a Consumer Law conference when . . . well, I will let David tell his story:

I had my book with me at lunch and a stranger asked me whether it was good. I told him I was biased and why (I am one of the authors), and then described the book this way: "We broke Lincoln's code regarding how he wrote his speeches. He used a regular template. It is replicatable. Anyone can do it."
Then I stopped, waiting for the obvious question (which is usually, "How did he do it"). Instead, this guy pulled out his iPhone, went straight to Amazon, and purchased the book as we were talking.

So we have a new book about something no one else has every written, and authors who understand the importance of talking about their work and sharing it with others.
And of course this all came with a bonus: a perfect example of how people are purchasing books today and will be into the future.
Brilliant. Simply brilliant.
--tps
Posted by TPS at 8:57 AM 4 comments:

Conference is going great. Right now. Rick Hatcher, Chief Historian of Fort Sumter, is finishing a 2-part talk on the operations against the fort during the entire war. James McPherson, Craig Symonds, and other notables are on later. Good to see old friends again, as we have each year for about two decades. TBC...
Posted by TPS at 10:25 AM 1 comment: 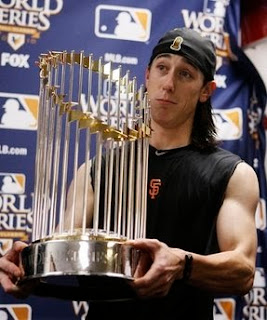 With arms like that, Timmy can probably lifts ten-pound joints. I thought it would take six, and (sort of) wanted to see it finish in SF, but that would have meant rooting against the home boys in Arlington. I just couldn't do it. If anyone ever doubted this game is all about pitching, this series really put the nail in that coffin. It was a fun season.

Alas, the Vikings are still playing . . .

Quote of the Day from my Favorite Vikings Blog 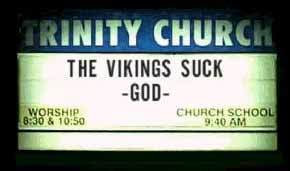 Stock Market Report, Week 8
What...the...hell. 2-5.
Two wins. Five losses. Eight stitches. 2 passes thrown to Moss. One idiot of a head coach. Zero sacks in three games---for the first time in franchise history.
The wheels are coming off, the bandwagon is as empty as a politician's promise, and after what happened today, as your Vikings financial advisor, I have one word: Sell.
The Rest Of The Defensive Line: You make more money than the entire GDP of Afghanistan, and you can't register a sack in three games? You almost have to try to do that. Maybe you should just donate your game checks to Whitney Houston. She'd at least put forth a better effort to hustle some crack than you guys are at hustling after the quarterback. And she'd be more entertaining.


Excuse me while I vomit.