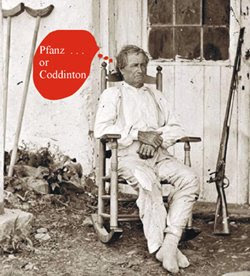 The results were interesting.

QUESTION: If you had one day to visit Gettysburg, and could only visit one area of the park, what would you see?

By a two-to-one margin, the choice was the fighting on the left end of the Union line (Longstreet's approach, Peach Orchard, stony Hill, Rose Farm, Wheatfield, et. al.), with 10 of the 33 votes (30%). Three other locations tied for second with 5 votes each (15%).

Reading question (think about this for a moment): Does how you answered reflect your reading habits? For example, if your answer was "Pickett's Charge," is that also your favorite topic to read about at Gettysburg?

One other question: What are your three favorite books on Gettysburg? If you could only have three in your library, what would they be, and why?

Gettysburg and Visiting the Field 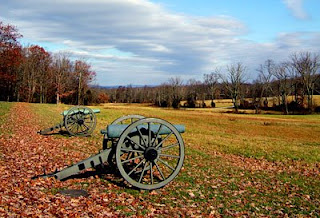 Having recently returned from Gettysburg (and since I will be there again for at least one day in early June), I have had the opportunity to discuss with many people what they enjoy about visiting that expansive, beautiful park. Everyone seems to have a favorite destination within the park. I know I do.

Hence my question, posed on the left. Think about it, and select your favorite area of the field to visit.

Does it correspond to what you pick up to read?

Back from Gettysburg and DC 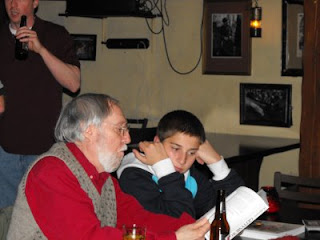 Being away for a week is a long time, especially when running a business. This week, however, flew past and as the final day dawned, I can honestly say we were not ready to return.

[Caption: Author William Frassanito and DT Savas discuss one of Bill's books. DT talked with the Gettysburg legend for 90 minutes, and both seemed to enjoy it. Note that D.T. is actually leaning on Bill's arm as he listens intently. I read Bill's Antietam book when I was just a few years older than DT, so it was a little odd watching him talk with Bill so many years later.)

Thankfully, I was able to meet many of our authors, business owners, and customers, scout out possible new topics for books, and investigate new outlets for selling our titles.

In Gettysburg, my son (DT, 13) and I met up with J.D. Petruzzi and Steven Stanley (authors of the soon-to-be-released The Complete Guide to Gettysburg), and a short time later linked up with Silent Sentinels author George Newton, who helped navigate a brief tour from the Reynolds' wounding monument north to the Railroad Cut. Although the weather was terrible (cold, rainy, and very windy), the RR cut caught DT's attention. He really enjoyed George's talk, and even ventured down into the cut and walked around. George stayed on the bridge, yelling information down into the cut while DT walked around, shouted questions back, and seemed to have a mini-epiphany. On Oak Hill, DT joined another group and listened intently to the discussion as we adults were encouraging him to hurry back to the car!

Later that night we met up with Jim Hessler, author of the forthcoming Sickles at Gettysburg (July 1, 2009). John Hoptak, a ranger at Antietam who happens to live in Gettysburg joined us. John and I are working up a book on Antietam commanders. It promises to be quite interesting. He has also graciously agreed to help JD and Steve on their next project (Guide to Antietam, similar to the Gettysburg guide). As I discussed in an earlier post, I had never met any of these fellows, so it was very enjoyable to do so.

The story of our evening at the Reliance saloon has already been making the rounds, and you can read about it on JD's post here. 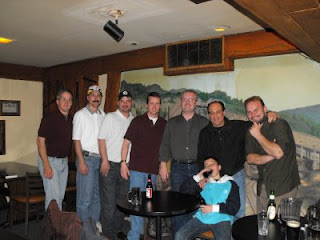 The tour of the field the next day by local David Moore and his wife Carol (in company with JD) was very interesting. The tree cutting has substantially improved the field, and the exposure of the Triangular Field / Devil's Den region was especially helpful to understanding the action. I had been to Gettysburg at least a dozen times before, but had never approached the town from the north, and had never been to Benner's Hill. Those vistas impressed upon me how foolish the Confederate position was: long exterior lines, weaker terrain). What were they thinking?

Although the weather was bad in Gettysburg that Saturday, we made it back in record time to DC to catch a game at the Navy Yard between the Nationals and Orioles. The weather was perfect, our seats were 15 rows behind the visitor's dugout, and the game was exciting, with a Nationals 6-5 win.

A highlight of DC was an Italian dinner with Brad Gottfried (author of Maps of Gettysburg and forthcoming (next month) Maps of First Bull Run and his new wife Linda. Both are wonderful, gracious people and it was such a pleasure to meet them.

Later in the week, DT and I visited Arlington Cemetery (I might post on that), and took a short metro ride up to Roslyn to meet with Dimitri Rotov. We had a nice dinner and some great discussions about . . well, you can imagine. His blog is always fascinating; he is even more fun in person.

Thanks to everyone for making the trip a wonderful experience.