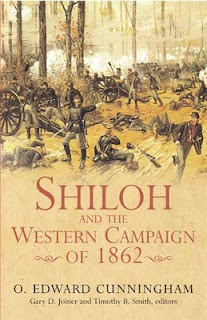 Here was the question:

Which Savas Beatie Civil War battle-related title is the most original and influential?

I asked it because I received recently two messages, one via phone and the other on email about two different books (both listed in this poll) and how "influential" and "original" each book was for the reader. Of course, that got me thinking . . .

Here were the four books I selected, and how people voted:

Plenty of Blame to Go Around: Jeb Stuart's Controversial Ride to Gettysburg, by Wittenberg-Petruzzi: 6 (27%)

Those Damned Blackhats: The Iron Brigade at Gettysburg, by Lance Herdegen: 6 (27%)

Shiloh, which was behind for the entire poll, won on the last vote cast. The manuscript, written as a Ph.D. dissertation 45 years ago, was decades ahead of modern interpretation of the battle. It was Main Selection of the History Book Club and the Military Book Club and 2.5 years later is still selling strongly there. Although we are out of the hardcover, you can now get it in paperback. I commend it--and all these books--to you.

Crafting books that are both "influential" and "original" has been my intent since forming Savas Beatie. The last thing I wanted to do was spend my time putting our books that add nothing of substance to the ongoing study of the Civil War. It is not an easy task, and we are all appreciative of the enthusiastic support readers have shown for our books.

And in case you do not get our monthly e-letter, our Christmas special this year includes FREE PRIORITY SHIPPING for any book purchased through our website. Just use the coupon code: freepriority.

Yes, I am in that sort of mood.