New Project: "The War of the Rebellion: A Compilation of the Final Official Reports Filed by Union Civil War Generals"


I am pleased to announce that Savas Beatie is kicking off 2012 with an exciting digital editing project. 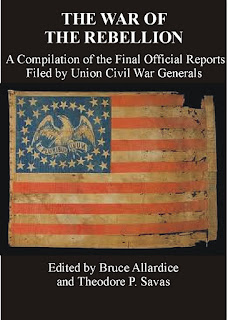 We have tentatively titled this multi-volume series The War of the Rebellion: A Compilation of the Final Official Reports Filed by Union Civil War Generals. It will be edited by Bruce Allardice and Theodore P. Savas. (Bruce is an adjunct professor at South Suburban College and Moraine Valley Community College in Illinois, and the author of Confederate Colonels, and More Generals in Gray, and co-author of Texas burial Sites of Civil War Notables.)
GENESIS:

Many years ago, Russel Beatie (he of Savas Beatie) discovered some 430 Civil War battle and campaign reports produced by 317 Union Army generals. Not only are they almost never used, but few Civil War historians seem to be aware of them.

The generals' reports of service represent an attempt by the AGO in 1864 to obtain more complete records regarding the service of everyone who held the rank of general. Think of it as a who-what-why-when-where, sort of request. Seeking both comprehensiveness and uniformity, the AGO requested each general include certain information, and as a result most of the reports consist of chronologically arranged narratives of activities associated with battles, campaigns, and other activities (including personal views on things from slavery to policy, strategy, blame for X, etc.). The lengths of these reports range from one paragraph (a stiff middle finger in the air saying "I am not doing this!") from Brig. Gen. Francis Vinton to Brig. Gen. Henry W. Benham's hundreds of pages in reply. Most reports are 30 pages or less. Some contain newspaper clippings, great maps, and even pamphlets.

Alphabetically speaking, the generals begin with John J. Abercrombie and end with Horatio G. Wright, with 315 more in between.

Savas Beatie will be producing these reports in high quality digital format suitable for all eReaders. Each report will include a one- or two-page biography of each general, with specific insight into the report he filed, a photograph, cross references with the Official Records, and suggested further reading. The reports themselves are in the general's own handwriting, digitally adjusted for the best reading experience. This way there is no issue about who wrote what and whether the translation is correct. (I have seen many of the original reports that ended up in the ORs. The transcription errors are legion and sometimes significant.)

We will be issuing these reports alphabetically in separate volumes. Because of size and formatting restrictions, the number of reports contained in each volume will vary accordingly.

Hopefully you subscribe to our free monthly e-letter called Libri Novus. [No? CLICK HERE to jump to our home page, where you just type your email into the Libri Novus box and we can include you!] If you already get our newsletter, stay tuned because next month's edition will include a sneak peek at Brig. Gen. John J. Abercrombie's biography, and partial report, an update on the project, and much more. I will also be posting here on this blog, and our website will have a dedicated page with clickable links to purchase very soon.

Thank you for your continued support.

We have all been asked to discuss, list, recommend, nominate, select, or otherwise thrust onto others our list of favorite Civil War books. Let's take a different route.
List the worst Civil War book(s) you have personally read, and explain briefly why you would slate them in that unwanted category.
Have at it.
--tps
(And sorry for being so late with my posts. I had shoulder surgery and am just getting back to the keyboard full time.)
Posted by TPS at 3:07 PM 9 comments: