Another OT: Childhood Memories. What are Yours? 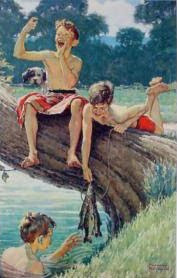 Six years or so ago I wrote a regular column for a local paper. One of them got a lot of interest, and I still get requests for copies. Since summer is nearly upon us, I thought I would reprint it below, and ask you for your recollections of how life has changed for kids. You can decide whether it is better . . . or not.
When We Were Free to be Kids
My son asked an interesting question during the endless summer that ended this week: “Papa, when you were a kid, what did you do in the summer?”
How do you tell a 7-year-old who has almost everything that it was better way back when without almost anything? That we perfected the art of doing nothing for days on end—and loved every hour?
How do you explain we enjoyed ourselves without Gameboys, Playstations, computers, TVs in cars, and portable cd-players? How journeys of exploration and adventure did not include a hand-held device on a sofa? That off-limit swimming holes were better than swimming pools in the backyards of homes we would have considered mansions available only in our dreams?
Can he possibly comprehend that when we left the house at 7:00 a.m. in cutoffs and a T-shirt, mom never asked where we were going? That catching pond frogs and building tree houses with rope swings was better than having 471 TV channels? That staying out all day and doing whatever we wanted was (gasp!) normal?
That our summons home was the street lights popping on and not a call on a cell phone?
Would he believe that we hoofed around town or rode our bikes (spray painted cool neon colors) with friends seated between the handle bars, holding on for dear life while trying to keep their toes out of the spokes as we flew down Virginia hill? Or that those same spokes made the coolest Atat-tat-tat” sound if you attached a playing card with a clothespin? That no one had heard of a bicycle helmet, and that we would not have been caught dead in one anyway?
That digging for night crawlers so we could fish in a muddy creek for bullhead with a bamboo pole and a red and white bobber (with your brother yelling at you for tangling his line) beat the pants off sitting in an air-conditioned house playing Nintendo?
Can you imagine the damage I might inflict on the psyche of a modern-day El Dorado Hills child if I told him our idea of pure drinking water was letting a garden hose in a stranger’s backyard run for several seconds before taking a warm sip? Or that “organic food” was eating Mr. Weydert’s corn raw off the cob before washing it down with milk straight from a cow’s utter?
That nothing was more fun than a roundtrip sneak attack on Mr. Bogart=s apple tree, hiding amongst his leafy branches happily munching green apples while stuffing another half dozen in our pockets and planning our getaway? That spine-tingling terror could be had by crawling on our hands and knees into old lady Taylor’s backyard (we thought she was a witch), pushing aside a large piece of slate hiding a well, dropping in a rock, and being brave enough to stay put long enough to hear the splash?
Today, kids can’t play in their own front yard without adult supervision. We played king of the hill on the large dirt and rock piles left in someone’s driveway blocks away. When we got hurt, we went home for a band aid and iodine (and a good and well-deserved old fashioned belt-to-bottom spanking) instead of to the lawyer’s office with dad to sue the homeowner.
Can today’s children conceive that we waged war from behind stacked up Culligan salt pellet bags with REAL WWII rifles our dads brought home from Europe or the Pacific, decked out in authentic German and American helmets and canteens—and it was more fun than playing Age of Empires or Call of Duty on a PC over the Internet with a stranger? Would they believe that every 9-year-old had a BB gun, every 12-year-old a .22 or 12-gauge, and responsible use was shooting cans off a fence or an egg-stealing blackbird—but never a robin?
Would he appreciate that sleepovers meant Jiffypop popcorn on the stove (burned black), kick the can in the backyard and, if you were lucky, a scoop of vanilla ice cream with Hershey’s syrup? Or that bed time meant squeezing into the hot top bunk with your buddy (no one had air conditioning) while his two brothers crammed into the bottom bunk?
How could I explain all this in a way that made sense?
“Long ago,” I began . . .
“You mean back in the olden days?” my son interrupted.
"Yes, way back when,” I smiled.
“When what?” he asked.
My smile melted away and I sighed heavily. “When we were free to be kids.”
Posted by TPS at 10:08 AM 7 comments:

Those of you who know me know I enjoy good heavy rock, with Iron Maiden at the top of that list (I will see them again June 20 at the Concord Pavilion with my son and brother and his son). 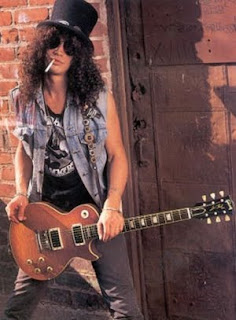 A musician I never fully appreciated is Saul Hudson (i.e., Slash), the former guitarist for Guns N Roses. His former band Velvet Revolver did some good work, but his new solo effort is outstanding, with each song featuring a different lead singer. (Hat tip to my brother Ants, who has been pummeling me with Slash's music for a few years now.) Some of Slash's new songs are hard rock, some blues, some instrumental. Here are three very different songs. Listen to each one twice (click the title to get to Youtube), and you will be hooked. 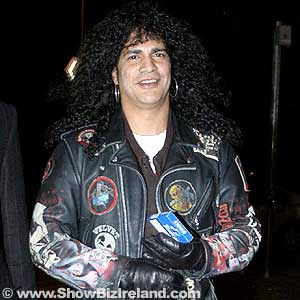 1) Starlight (featuring Myles Kennedy--best singer on this collection; his range during the chorus is amazing. Myles was selected as lead vocalist for Slash's tour this year.)
2) I Hold On (featuring Kid Rock, who sounds a lot like Rod Stewart here.)
3) Beautiful Dangerous (featuring Fergie from the Black Eyed Peas--a band I cannot stand and would not see if they paid me to attend; didn't know she could actually sing. She can perform this sort of soulful rock at this level, and chooses to stand a look like a fool with BEP?)
A prior Slash musical act, Snakepit, produced some outstanding music as well. Here are two songs:
1) Serial Killer (listen carefully to the words, and the guitar solo--hauntingly good . . .)
2) Landslide (takes a few earfuls, but it catches on.)
Enjoy
tps
Posted by TPS at 10:07 AM 3 comments:

In today's installment of Media Beat, bestselling novelist and attorney Scott Turow recalled his early days as a struggling novelist before he published Presumed Innocent. He revisited those characters in his newest novel, Innocent.
He recalled his early failures as a novelist: "Presumed Innocent was written over a six to seven year period with intervals in between where I was figuring out the end of the book and writing other stuff ... My life as a writer was carried on against the odds. I had written four unpublished novels by then ... as a writer of fiction I hadn't gotten very far. I just wanted to do it. It was my dream as a kid to be a novelist and I wanted to carry on with it. And I did. The truth of the matter is that the people who succeed in the arts most often are the people who get up again after getting knocked down. Persistence is critical."
Indeed. It is in all walks of life.