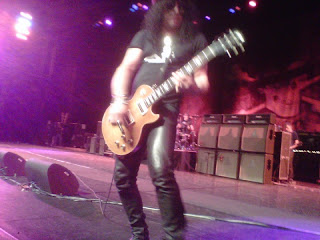 Let's just say this. The boys got in front, where I watched the first three songs five feet from the Slash man, and then went back to our table so my brother could do the same. At the end of the show, Slash handed his pick to my son, who also ended up with the bassist's pick. (He gave that to his cousin Nikkos. Slash is Nikkos' musical idol, so I expect by Christmas the $30.00 bucks he offered DT for Slash's pick will be north of a hundred. LOL) Kyle, a bassist in Nikkos' band JAXX, ended up with a drumstick which was signed and imprinted with "SLASH."
The picture here was snapped from my blackberry on the first song (Kill the Ghost). You can see we were within arm's reach. Haven't been this close to a major act since Rush at Arnold's Park in Iowa in 1975. Two hours and 10 minute set, 22 songs, and was just wonderful in an intimate venue. Could not have been better, and was easily as good as the Slash concert five weeks ago at the Warfield in San Francisco.
Thanks Slashman. You are a true virtuoso, and your recorded music does not begin to do you justice. On the stage you are simply in another world.

That is sure one to remember. Your boys will never forget it either.
I saw online they finally started playing Welcome to the Jungle later in tour. Did they play this last night? How is Kennedy's voice holding out? He has a stunning range.

Fantastic - I never realized Slash was this good until you published your descriptions of his shows. Now I need to make an addition to my music library, and hope that he hits the east coast soon!

Stephen, Yes, they played Welcome to the Jungle this time, and it was fabulous. Myles' voice is still very strong despite the length of the tour. Would say 90% of what it was at the Warfield four weeks ago. Just a humble, good guy, as is Slash (from what I have seen, heard and read).

I would suggest jumping to Youtube and typing in "Slash Starlight"

"Slash I hold on"

Live stuff on Youtube is unmixed and out of balance and always sounds bad. Last night he did a long blues rock/solo that was amazing. He plays so long, so hard, and so well your fingers get tired watching his. At the end, he was so jazzed he was dancing around and doing his one-legged hop across stage (his signature) and spinning in circles playing Paradise City.

Again, I was a very lukewarm fan before I saw him live. Liked his new stuff, had no idea what he was like live. I say it again, he is better IMO than Van Halen, Blackmore, Schenker, etc. More versatile, more fun to watch, and more melodic.

(Civil War Fans: Chris is the author of the great new book on Stoneman's Raid. Jump off this site and go to our site and buy it. No, wait. I was not smart enough and turned it down. So . . . jump to Amazon and give it a buy.)

Arnold's Park at Okoboji. Wow -- hadn't thought of that place in a long time.