X
How deeply imbedded is the now thoroughly disproved myth about General John Hood's addiction to drugs? [Read General John Bell Hood: The Rise, Fall, and Resurrection of a Confederate General, by Stephen M. Hood (Savas Beatie, 2013) for a complete examination of this slanderous issue, how it originated, and what recently discovered medical reports tell us today.] 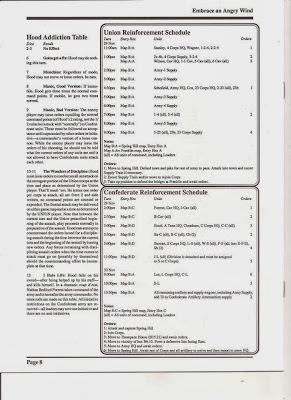 Well, as friend Craig Swain brought to my attention, here are the optional rules from the old board game "Embrace an Angry Wind" (published in 1992, the same year Wiley Sword's book of the same name appeared).

The game covered the battles of Spring Hill and Franklin and boasts . . . ready for it? . . . a "Hood Addiction Table."

Wrong history leaks in many directions.

Teddy, you're addicted to typos.

Richard McMurry refers to the non-scholastic, circus-like Civil War history industry as "The Civil War Rubber Chicken Circuit." This board game is a perfect example.

Ted, My copy of the new Hood book arrived the other day. The jacket and interior design look great. I am looking fwd to delving into the debate, although I have to admit as an ANV guy I am a Hood fan. I really liked the Cicero quote at the front "The first law of the historian is that he shall never utter an untruth." Does this mean that "The first law of the politician is that ..." But then I digress. BTW, my Mom is from Huntington which caught my eye when I saw Sam Hood's bio. I hope to meet Mr. Hood one day.

Thank you, John. Coming from a quality publisher, I appreciate your kind words. I think you will enjoy the book and look forward to hearing it.

"The first law of the historian is that he shall never utter an untruth."

So much for my Roswell and JFK Conspiracy collection.

We don't want the Civil War to join that bunch.