X
I was and continue to be pleased by the response and interest our two new "revisionist" titles are generating within the Civil War community. 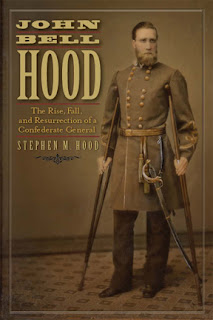 The advance publicity and dust jacket (and book trailer) for John Bell Hood: The Rise, Fall, and Resurrection of a Confederate General, by Stephen Hood (a distant relative) promises quite a bit. Click HERE to see the book on our website or jump to Amazon and read about the book for yourself.

Or, just ask Kevin Levin, who blogs widely on a variety of subjects. Way back in February he took the time to create a post entitled "Your Book Better Deliver On Its Promises." The post implicitly challenges the author and publisher (me) to put up or shut up. Many challenged him on his post (as well as one of his comments, which I found rather silly and a direct shot against me and my company), and eventually Kevin essentially shut down the conversation by writing that he was simply too busy and was unlikely to ever read the book. Pardon me, but . . . huh?

I guess to him it is fair game to take the time to pull the trigger on a drive-by post, and then, well, close your laptop. The least he could do is comment on all the reviews, which thus far have been very favorable. (I just returned from our Savas Beatie Author Conclave in Gettysburg, where one customer told me he bought the book after reading Levin's blog post (and author Hood's reply) and came away completely convinced by its premise; he looked up everything the author wrote--OR cites, secondary sources, etc. and was "flabbergasted"--his word--by the lies and deceits written by so many for so long.) Amazon reviews are also strong.

Still, because this book challenges establishment writers (not all of whom are professional historians), I am expecting blow back from the elites who look down on independent publishing and authors who don't hold a Ph.D. (Spoiler alert: Generally speaking, many who hold doctorates can't write to save their lives, but they do have damn good editors who make them read like Faulkner. Some day I will post about that.)

Kevin, what about a post asking your followers who have read the book whether it "Delivers On Its Promises"? You know, fair and balanced coverage. Just a thought.

Frank Varney's General Grant and the Rewriting of History: How the Destruction of General William S. Rosecrans Influenced Our Understanding of the Civil War, is a similar book (click HERE to read about it). But that will have to await another post. A good cigar is calling my name.

I must say I was skeptical about the Hood book because it was written by a Hood (who turns out to be a very distant relative) and I thought it was merely an argument that he was a brilliant general and so on. I heard the author speak and bought a book from the seller there and read it carefully actually more carefully and slowlt than any other book and opened by sword and Connelly and other books he notes to compare their statements of "fact" with the sources they cite.

I have reched the sad fact that indeed some authors have intentionally altered facts to paint General Hood in a bad light. I assume some of the examples are the result of sloppy research, but so many mistakes over and over is a pattern, and some are so obviously egregious that they can only be considered intentional. I am saddened by this because now as a reader of many areas of history I will always be less sure of the facts as presented. From now on anything controversial I will try to go back to the original source and double check.

I must say in closing that while Hood was not a top tier army leader his plans make a lot more sense now, as does his attack at Franklin. The man had no chance and it would not have mattered if Lee himself had taken command of the AOT outside Atlanta. It would have fallen. But now I understand it all much better and the man especially.

Glad you are back blogging. I have missed it.