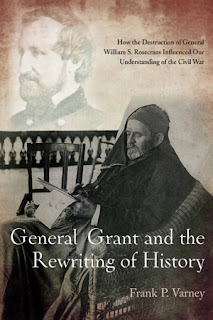 X
Not to put too fine a point on it, but those of you familiar with me and with Savas Beatie know we only publish fresh original well-researched books that offer our readers something to set their teeth into. We leave the baloney and other assorted sorts of crap between the covers to other houses (who routinely publish, usually without editing) what I turn down.

Two of our recent books are garnering a lot of attention because they swim upstream, against the current historical thought that has come to dominate so much of Civil War history. I am referring to John Bell Hood: The Rise, Fall, and Resurrection of a Confederate General, by Stephen Hood, and Frank Varney's General Grant and the Rewriting of History How the Destruction of General William S. Rosecrans Influenced Our Understanding of the Civil War.

Dimitri Rotov, no friend of the poorly researched or reasoned tome, has reviewed the Varney title and produced an interesting, longish post about it. It is mostly quite positive, with a few minor negative observations. He explains:

"Mr. Varney makes hay with a problem we have bemoaned in this blog from day one. Historians, mainly pop historians, summarize historical problems in a single statement attached to a single source. (For this sin against history, see especially anything by McPherson or Goodwin). Not to flog a dead horse, but an event shrouded in controversy is resolved by “that’s the way it is” and a note citing a single source that summarizes the author’s position. This is terribly offensive to the deep reader and what Varney has found is that Grant’s memoirs are single sourced repeatedly to put paid to messy history."


You can read the entire long and interest post HERE. It is well worth your time.

PS: Someone might let Levin know that some "real reviews" on the Hood book have appeared on Amazon.