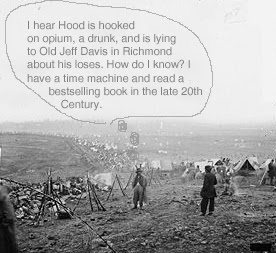 X
Frankly, I am saddened and a bit frustrated by so-called "students" of the Civil War (substitute history there if you like) when they announce they don't have to compare sources or read and think for themselves. One poster on Facebook let us know that "Sword wrote a good biography of Hood. He is critical of Hood but if you know about the Battles of Nashville and Franklin the criticism is justified." He later wrote this: "Sword treats Gen Hood sympathetically. After Gen. Hood's experiences and physical pain that he became hooked on pain killers only makes the general human."

I think it matters whether what you "think" you know something, and have solid evidence of that. In this fellow's mind, no historian of any standing could ever misuse sources (accidentally or intentionally), and once an author writes an award-winning and/or "bestseller" and/or "really good authoritative book" on a subject, there is nothing left to say. I know Wiley Sword personally, and I like his work. I love his Shiloh volume. I don't know what he was thinking when he wrote and sourced what he did, and readers will have to decide for themselves. He wields a hell of a pen and is one fine writer.

This Chapter 11 excerpt, entitled "John Bell Hood and the Battle of Nashville" is from our new book "John Bell Hood: The Rise, Fall, and Resurrection of a Confederate General," by Stephen Hood (Savas Beatie, 2013).

You can also find it here: http://www.savasbeatie.com/books/pdf/Hood_Nashville.pdf


We suggest a careful reading to fully appreciate what you will find near the end on pages 196-199. Tragically, this is how falsehoods and exaggerations become cemented in the public mind and popular history as “truth.” There are 19 chapters like this. N-I-N-E-T-E-E-N.

We ENCOURAGE you to copy this, print it, and share it with others via email, Facebook and the various social media outlets.

Enjoy and thank you for your continued support.

The Civil War forged this nation. And you're debating if Hood used PEDs?

And then expect 'continued support'?

Kevin, If you think this is about PED, then you need to get off your knees and stop looking at the blades of grass. That is not what the book is about.

TED: JUST KEEP PUBLISHING. DONT WASTE YOUR TIME ON MOPES AND CLOWNS. WE KNOW THERE IS A SHRINKING MARKET AND THAT A LOT OF WHAT IS BEING DONE IS MEDIOCRE. YOU ARE PRODUCING THE BEST HISTORY IN THIS FIELD. I AM A REPEAT BUYER WITH OVER 30 OF YOUR TITLES. I FIND THE BLOGGING INTERESTING BUT TIME CONSUMING AND AT TIMES JUST PLAIN RIDICULOUS. WISHING YOU AND YOUR COMPANY CONTINUED SUCCESS. THANKS, JAMES MCCORRY

James, we have long appreciated your support of our efforts, and thank you for your kind words as well.

We work hard to deliver original material with a fresh perspective. Most people deeply appreciate it. Others, not so much--but they like to tell the people with the blood and sweat equity working in the trenches how it should be done.

I always find that quite . . . revealing.

Have a great day.

I can usually resist jumping into blog exchanges, but not this time.

In my book I give little analysis and opinion of JB Hood because I share his surname, and thus have questionable credibility. Fortunately, I don't need to give pro-JB Hood opinions because the historical record is full of praise and support by his contemporaries, both Union and Confederate. My book is very much a compendium of readily available historical evidence that was either overlooked or intentionally concealed by previous authors.

I urge people to read the book and disregard whatever opinions I might present on JB Hood. I give plenty of analysis and opinion on writers and scholars, but when it comes to JB Hood, I let his contemporaries do the talking.

I share your frustration, but having been in this business long enough have come to expect it from a thin slice of CW readership.

I was reading two op-eds this morning. Here is what I found in one comment section: "Had I known this general was a Fox News contributor, I would not have bothered reading this crap." [I don't have the exact quote, it that is darn close.]

In the other comment section was this gem: "This clown is on MSNBC and NPR routinely, so who cares what he has to say?"

The point I am trying to make, which should be obvious, is who cares where they appear as commentators, etc.? What about the SUBSTANCE of their presentation/argument? As you write, who cares what your last name is? So if it was Smith they would read it, but if it is Hood whatever you have to say must be baloney? What about the substance and credibility of your arguments and research?

This is akin to a blogger noting recently that there were few footnotes in the Chapter 19 that we reproduced in full online the other day. I believe that excerpt--a single chapter--has 50 footnotes (including a couple lengthy explanatory notes). This one chapter is a tailored slice of Hood history dealing with the Nashville campaign and largely with how 2-3 historians dealt with the topic. Therefore, the accompanying notes are largely confined to . . . SURPRISE!! . . . writings by those historians (in addition to cites to the Official Records, some contemporary Confederate officers, and more). Perhaps I missed that important point in his discussion.

In the end, many people get emotionally involved and thus deeply invested and locked into a position/mindset. They don't want to see facts that contradict their preconceived conclusions. To think through a matter and substantively evaluate an issue might mean having to abandon a long-held belief and thus admit a mistake. Many people cannot admit mistakes (the "why" escapes me). What is especially curious to me is how vitriolic some people get about events 150 years old. Is not the truth more important than a false narrative nailed into place regardless of the motivation?

But of course, as you know the reviews (or "reviews" depending upon whose ox is being gored), emails, calls, and especially sales confirm your book is being widely read, debated, and enjoyed. In the end, no credible historian or writer can ever ignore the voluminous amount of evidence you have brought to light. The next one who picks up a pen and blindly copies others will do so at his peril.

I also think the publication of Hood's Lost Papers early next year will shed more light on this important issue and solidify your achievements.

This is very similar to the ongoing challenges that I have had with Dan Sickles during the 5 years or so since my Savas publication.

Whether you "like" Dan Sickles or not, and I am thoroughly uninterested in having that debate here, the man has at least been the victim of some pretty sloppy oral history. Sloppy history that just keeps getting repeated and repeated and repeated. Sounds like Hood has the same issues.

I can present an argument with numerous source citations - preferably contemporary sources - and in response some folks just are not going to change the way they have been conditioned to think. Often because their favorite secondary author told them so.

I guess I have become used to it so my suggestion: don't give yourself too much grey hair (or lose more of it) trying to get people to re-consider long held notions that Foote, McPherson, Sears, Trudeau, etc. told them to have. Just accept that you are presenting an alternative and the open-minded people will "get" it. The closed-minded people never will.

Well said, Jim and Sam. I've also done the same with two of mine - "Plenty of Blame" and "One Continuous Fight" (both SB published). In the first, we challenge, in a sense, the long-held notions about Jeb Stuart's ride to Gettysburg by bringing forth as much of the admittedly overlooked and ignored (and often supressed) evidence and facts, which will unavoidably clash with the long-held opinions of most past writers. Same with One Continous Fight - most Gettysburg writers have simply characterized Meade's pursuit of Lee as weak, mismanaged, and colossally unaggressive. We simply give the reader much more to think about - and WHO to think about - when forming their own opinion.